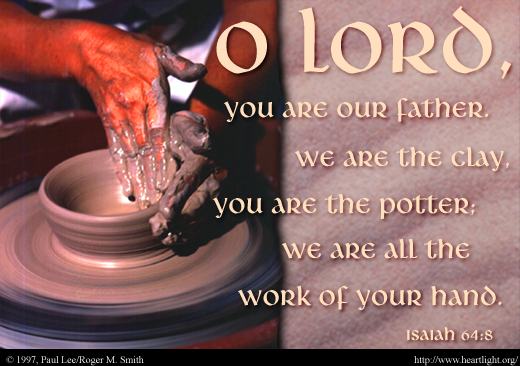 Isaiah 53 ~Verse 2 For he shall grow up before him as a tender plant, and as a root out of a dry ground: he hath no form nor comeliness; and when we shall see him, there is no beauty that we should desire him.

Isn't it amazing how different the Bible presents people and things from the way unlearned and ignorant man presents things. Going back to verse 1 we look again at the first question: "Who hath believed our report?" Evidently not many is the correct answer.

The subject of Isaiah chapter 53 is the coming Messiah. Jesus Christ to those of us on this side of the cross. Saviour, Lord, King of Kings, Creator, Emanuel. He is the subject of the entire 12 verses of Isaiah 53. Jesus was a Jew. He had dark hair and dark eyes and His skin almost certainly would have been darker than the Caucasian man usually portrayed. What strikes me and has bothered me for years is that almost every picture you have seen of Jesus Christ is that of a long haired, usually blue eyed, well proportioned, good looking man that women would swoon over. Jesus did not look like a 60's flower child or hippie.

Just for comparison now lets get a mental image or better yet look at the picture you have hanging in your home or that is in your family Bible etc. of Jesus Christ. Does he look like a tender plant? A tender plant is physically fragile and has to be sheltered and protected from the elements until it gets some growth. Not enough water or too much water will kill it or stunt it. Too much chill or too much heat can destroy it. Think of a tomato plant you will cover to keep frost off of it. That is a tender plant. Think also now of a root of a tree laying on top of the ground. Ain't too pretty is it? Gnarled and exposed.

Go now to the last part of the verse: "he hath no form nor comeliness; and when we shall see him, there is no beauty that we should desire him. " Does this verse match your picture? I think not. Why then do you suppose that all the painters, especially those of the Renaissance period portrayed Jesus so un-biblically? I suggest two reasons. One they did not know the Bible and what it said about the coming Messiah. Two this is what they thought Jesus ought to look like. Man's ways are not God's ways (Isa 55:8-9). God did not want people to follow Jesus because they admired His looks and physique. God wanted men to follow Him because of who He was and what He said and did..
Look at how people fawn over movie stars and their sports heroes. Look at the ones that achieve stardom. Almost all will have that beautiful body and face. Their hair will be beautiful and the aura around them will fairly scream: "I'm somebody"!

Jesus came to this earth to "seek and save that which was lost" (Luke 19:10). His mission was to live a life that was free of sin and do what man could not do. He was then to be the perfect sacrifice for man's sins.

His ministry was that of a man preaching the good and narrow way and that men were to repent for the Kingdom of Heaven was at hand. (Matt. 4:17) He preached that He was the Door, and Good Shepherd and He wanted His followers to be those who would heed that message and the teachings that went with it. It was not about His looks it was about His Words. Jesus did miracles. It was not about His miracles but it was about His Words. The way Jesus lived His life bore witness to the words He spoke. Good looks would have been a hindrance and a temptation to many and God was looking for those who would trust what was on the inside of Him and not what was on the outside. After all doesn't He judge us and love us for what is on the inside?. Should we do any less?


This study was prepared and written by Brother Dwight Rhodes

What did Jesus look like
I mean for real
Was He tall, blue eyed
Like all the pictures reveal

He must have been tall
To stick out in a crowd
With brown hair, blue eyes
He must have really stuck out

The Bible says no images
This will not be allowed
It was about the message
That was the purpose, no camera's allowed

Jesus looked like the common man
Easily lost in the crowd
No one special, just a man
A young Jewish man in the crowd

There need not be pictures of Jesus
His message was most important to the human race
It is too easy to fall in love
with a picture, worship a face